It has all the features of the Windows build with the added niceties of the OSX widget set.  Grab it now on the downloads page.

It's been a long time in the coming, but Sproxel v0.5 has finally been released!  New features include: 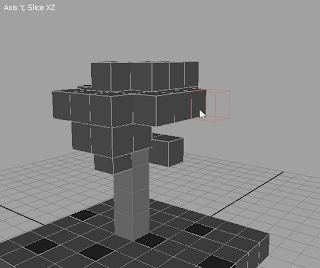 This image shows the new voxel outline option, drawing each filled voxel with a thin border.  It also shows the new interactive tool preview feature, drawing a red box to show where the next splatted voxel will appear.  Both of these options, as well as a new tool dragging feature can be modified in the preferences dialog.

A lot of code has been changed under the hood of Sproxel for this release.  The results of these changes are not immediately visible, but upcoming versions will leverage the new technology in the form of layers, animation, selection, cut/copy/paste, indexed palettes, and various other features. Stay tuned!
Posted by Andrew at 9:18 AM 1 comment: