A new version of the Sproxel editor has been released.  New features include: A new toolbar, CTRL+F frames the entire voxel grid, & new mouse button behavior!

The download is available at the usual spot (following the "Download Sproxel" link on the right side of this page will also take you there).
Posted by Andrew at 9:11 PM 1 comment:

Email ThisBlogThis!Share to TwitterShare to FacebookShare to Pinterest
Labels: Release

My buddy Joel likes participating in the Ludum Dare game development competition.  It sounds like a blast, but my love of sleep has won out over my love of development every time.  This last time around, Joel made a quaint Zelda clone using graphics designed in Sproxel.
Click here to check it out! 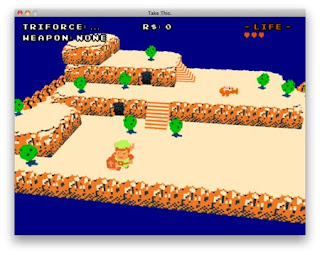 Posted by Andrew at 7:55 PM No comments:

Email ThisBlogThis!Share to TwitterShare to FacebookShare to Pinterest
Labels: Game

Before I started writing Sproxel, I was made aware of a tool named Cube Kingdom.  It seems like it's pretty cool!  Is anyone aware of other sprite-voxel editors out there on the web? I like the menus and the general feel of the Cube Kingdom.  At the moment, Sproxel feels a lot more technical.  This may be a good thing or may not.  I'll get a better feel for things as time goes on...
Posted by Andrew at 7:46 PM 4 comments:

Email ThisBlogThis!Share to TwitterShare to FacebookShare to Pinterest
Labels: Tool

Why Create a Sprite Voxel Editor?

Lately there have been some great "indie" games popping up here and there.  Many of these games take risks with gameplay, graphics, level design, or all-around-style.  One of the more risky styles has been to represent elements of the world as voxels.  It's difficult to match the level of surface detail in the latest polygon-based games with voxels, but voxels allow for tons of neat effects since the world is represented as a volume instead of a collection of surfaces.  Minecraft, for example, has gotten a lot of mileage out of the technique.

It wasn't Minecraft, though, that inspired me to create Sproxel.  Minecraft represents the world as voxels, but it doesn't go whole-hog with the technique.  It still overlays polygon characters into the world - they're blocky, but they're not created out of the same building blocks as the land.  It took a yet-to-be-released game named Fez to really pique my interest.


Fez uses a technology they call trixels to create an entirely new gaming experience.  One second you think you're looking at a relatively low-resolution 2d game, the next you're looking at a bunch of 3d representations of the pixels you thought were flat!  A second later, you're back to an ortho-2d view of the world, and your brain grows accustomed to thinking of the data as pixels again.  This was such a good combination of retro, modern, and new game design that I just had to get in on it somehow!

Another game with a similar all-voxel approach to gameplay is Voxatron.  Voxatron is also still in development, but it too is looking like it's going to be great.


Another youtube video shows Voxatron's own sprite voxel editor, but it hasn't been released yet, and I just couldn't wait to give game developers a tool they could mess with between now and when Voxatron comes out.

If you haven't seen these videos yet, hopefully they inspired you as much as they did me.  With any luck, some talented engine designers are already working on their voxel-based engines, and Sproxel will help them make their dream a reality.
Posted by Andrew at 7:33 PM 1 comment: